For the last two weeks, we have discussed different after school activities and studied related vocabulary. We brainstormed about equipment that we would need for a photography class, wrote a recipe for fruit and egg salad, and talked about different types of musical instruments and how to play them.

Now, students are able to scan flyers about after school activities and find specific and important information. We will continue to explore this topic and we  will write a short paragraph about our favorite after school programs.

Here you can find a song “יש לנו תזמורת”

We have been learning all about Purim.

We reviewed facts about the story and the characters of Megillat Esther.

We also reviewed the 4 mitzvot one is supposed to perform in Purim and we discussed how we will perform them during the Senesh Purim festivities.

3rd grade will be leading the blessings before communal Megillah reading. We have been learning these brachot and practicing them as well.

In honor of Purim, we are currently learning about the life, customs and history of Persian jews.

We were fascinated by their art, music and rich history.

In honor of Purim, we are revealing something about ourselves that others don’t know.

Just like Queen Esther revealed her jewish identity at the end of the story and rescued all the jews from a terrible fate, we decided to share a revelation about ourselves with the rest of the class.

Stay tuned as these revelations will be displayed on our bulletin board for others to learn more about the 3 rd grade.

February came in like a lion and …. oh, wait. That’s supposed to be March not February! What crazy weather we have been experiencing! These last two weeks have been chock full of units ending, units beginning, and getting into the juicy middle of writing.

Recently, Third Grade met with Carolyn to discuss how to be a stronger friend, and what to do when having a conflict with a friend. We came up with SO many strategies that, instead of using options from a website, we created a wheel of choices for the kids. Here is a picture of what we have up in the classroom, as a reminder of what to do. 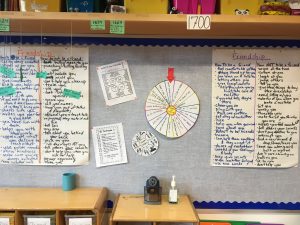 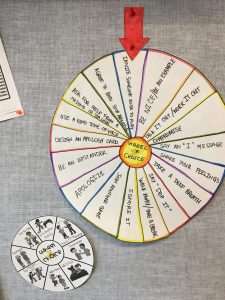 This week, we discussed two topics: how to keep calm, and what a problem diary is. A reason to focus on “keeping calm” is that this is the step students (and adults) tend to forget before saying something or doing something they would not typically say or do. BUT if you are to follow the steps (STOP!, tell yourself to keep calm [and maybe step away], slow down your breathing ]two seconds in through your nose, three seconds out through your mouth] two times, and praise yourself for a job well done), you are less likely to react negatively in the situation. The problem diary accompanies this because — after a situation happens — it is a time for you to reflect on where it occurred, who it occurred with, what happened, how you responded, and what you could do next time. The third graders were able to come up with MANY situations in their lives where this has happened, and reflected on what could be done next time. Below is a picture of the Problem Diary. If you would like your own copy of this, please email me :) 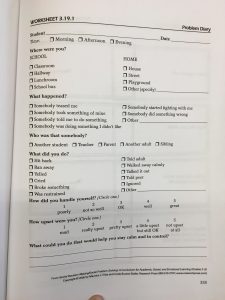 Last week, we worked on adding or subtracting money. Students came to realize that while seeing a decimal is anxiety-ridden, the amount is JUST LIKE a regular number you would do a math operation with, so it wasn’t so scary.

This week, we worked on division. We learned two new vocabulary words this week: quotient and remainder. Quotient is similar to “answer,” though we tried to reinforce that it does NOT mean the whole number, like the answer would mean in addition or multiplication. Remainder is synonymous to “left over.”

As we’ve discussed in prior weeks, there is a strong connection between division and multiplication. Whenever we get stumped by a division equation, it can be very helpful for students to turn it into a multiplication equation. In part, this is due to multiplication being seen more often and more comfortable to solve. So instead of seeing 960 ÷ 30 = ?, it would read 30 x ? = 960. Trying repeated addition is another strategy to help students get to the correct answer.

In reading, we have been restructuring how the next round of book clubs will run. Instead of having teacher-lead discussions, Third Graders are learning how to have successful and productive student-led conversations. The four jobs we have focused on, these past two weeks, are connector, discussion director, speaker and key detail finder. The connector takes parts from the book that can be connected to him- or herself, connected to another character or situation in a book, or connected to the world. The discussion director comes up with questions to ask the group, focusing on open questions. For instance, instead of asking “Will Opal ever find her mom?,” an open question would be “If Opal finds her mom, how will it happen?” The speaker is in charge of summarizing the chapter and choosing the key moments that everyone needs to know about, in terms of the plot. Finally, the key details finder looks for excerpts from the text that evoked emotion — be it funny, infuriating, interesting, or sad. We used our whole-class read aloud, Because of Winn-Dixie by Kate DiCamillo, to use as the book for our jobs.

When practicing the discussion director job, I have to admit that this class was SO good at initially asking open questions that I had no need to revising a majority of their responses. Here are some of the questions we asked.

Throughout the end of January and all of February (we will continue writing until conference week), we worked on how to write a persuasive speeches. We started by brainstorming two themes — writing about a person we think EVERYONE needs to know about, and writing about a change that needs to be made in school/the world. Some topics include writing about a beloved dog, wanting the recess yard to have mats as the floor instead of concrete, the dangers of a roller coaster, and why we need nap time during the school day. Throughout the process, we have added onto what we learned during our narrative unit — where the focus was using descriptive/juicy words that paint a picture of the story, to now focusing on:

Here are some pictures of what needs to be included an opinion writing paper, followed by a checklist-poster of what we need to do to revise these speeches (I apologize for my freudian slip of writing “information” instead of “opinion”: 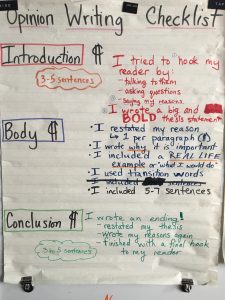 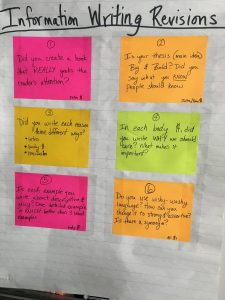 One student, this week, mentioned that the revision process is MUCH easier now that we’ve practiced it three times prior to this unit.

Our class lessons about the Erie Canal have come to a close, but it would be underwhelming to describe the interest of each student on construction of the canal. They were ENTHRALLED by the history of how it came to be, how and by who it was made, and how it affected each city or town that had a lock. We spoke a lot about how this canal affect the economy and population of a town, the canal turning them from a village to a city. For instance, in 1820 Lockport, NY has 3 families living there, and by the end of 1822 there were 337 families in that town.

Last week, we jumped forward 140 years, to the early 1800s. We began exploring American migration at that time, and how the Erie Canal helped turn New York into the heart of America. As a group, we looked at New York State geography and noticed that while there is a simple way of getting materials from New York City to Albany or Schenectady, it was VERY hard to transport materials to or from west and north New York State. This is due to the various landforms, such as mountains, lakes, plateaus, swamps, forests and more. Headed by New York City Mayor, DeWitt Clinton, a push for a man-made waterway became stronger throughout the first 15 years of the 1800s (This platform helped DeWitt Clinton get the votes to become Governor of New York).

The process to build it took eight years, from 1817-1825, though Governor Clinton had promised it would be finished in 1823. The digging started on July 4, 1817 in Rome, New York (who knew that there was another Rome??), led by DeWitt Clinton. During the time they cleared the pristine, untouched forests of Central New York, two inventions were created to help laborers remove trees, and involved using a VERY large wheel and chains. The main issue for laborers came when they got to the Montezuma swamps. They found that the tools they were using with sink in the mud, and everything had to happen or be dug by hand. As you can imagine, being waist high in the muck of the swamp was not a favorite experience for the laborers. As well, a few different insects made the work that much harder and that much more dangerous. An assistant to the engineer, James Geddes, realized that the best way to take through the swamps was to dig in the winter instead of the summer. After putting an advertisement in the regional newspaper, in central New York, the women of the area knitted over 300 pairs of gloves for the laborers use as they were working in harsh winters. Men definitely appreciated this, and, through the support, pushed forward in completing the first 70 miles of the Erie canal. On October 22, 1819, the first section of the Erie canal, called the Middle Section, was open for use! Other landform issues were: how to build a canal over the fast moving Genesee River (which had waterfalls); and how to have a canal climb 66 feet high to get from one side of the town of Lockport NY to the other. On October 26, 1825, Governor DeWitt Clinton got aboard a packet boat to ride the canal from Buffalo to NYC, to start the “Marriage of the Waters.” It took him 7 days to get from Buffalo to Albany (across the Erie Canal), and then two days to boat down the Hudson River to the Atlantic Ocean.

Something we learned in Music class was the famous song “Low Bridge, Everybody Down,” written by Thomas S Allen, in 1903. A fun fact about this song is that while it is about the experiences of a hoggee worker (a boy who drives the mule, who towing the boat) on the Erie Canal, it was never SUNG by workers on the Erie Canal (though the captains of the boats WERE known to shout “Low bridge — everybody down!”). Many of the grades have been hearing the Third Graders singing this song as we walk to each class. We cannot WAIT for June, where you will get to see and hear the song performed at our New York City Musical!

Below are some youtube links of informational videos about the Erie Canal:

What is the Erie Canal?

200 Years on the Erie Canal

Some discussion topics you can have with your student: