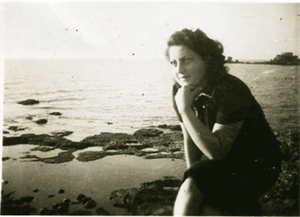 There are stars whose radiance is visible on earth
though they have long been extinct.
There are people whose brilliance continues to light
the world even though they are not longer among the living.
These lights are particularly bright
when the night is dark.
They light the way for human kind.

Hannah Senesh was born in Budapest, Hungary in 1921. The daughter of a journalist, she was one who hoped  to become a writer. The rise of antisemitism in Hungary during the 1930’s overshadowed her adolescent life. Senesh believed that there was no future for Jewish youth in Hungary and so she became a pioneering Zionist.  While learning Hebrew and attending agricultural school in Palestine, she continued to write diary entries, poetry, letters and plays. Senesh was committed to cultivating a land for the Jewish people.

In 1943, upon learning about plans for a rescue mission into Europe, Senesh volunteered to become a paratrooper with the British Air Force. After crossing the border into Hungary, Senesh was captured and tortured. She was executed by a firing squad in Budapest, Hungary on November 7, 1944, at the young age of 23.

Hannah Senesh responded to endless hatred, danger, and her eventual torture with much more than courage. She responded with total faith that ultimately justice would be served. The bravery, determination and self sacrifice of Hannah Senesh and her belief that one person can make a difference, inspire us everyday. We are proud that our school bears her name.