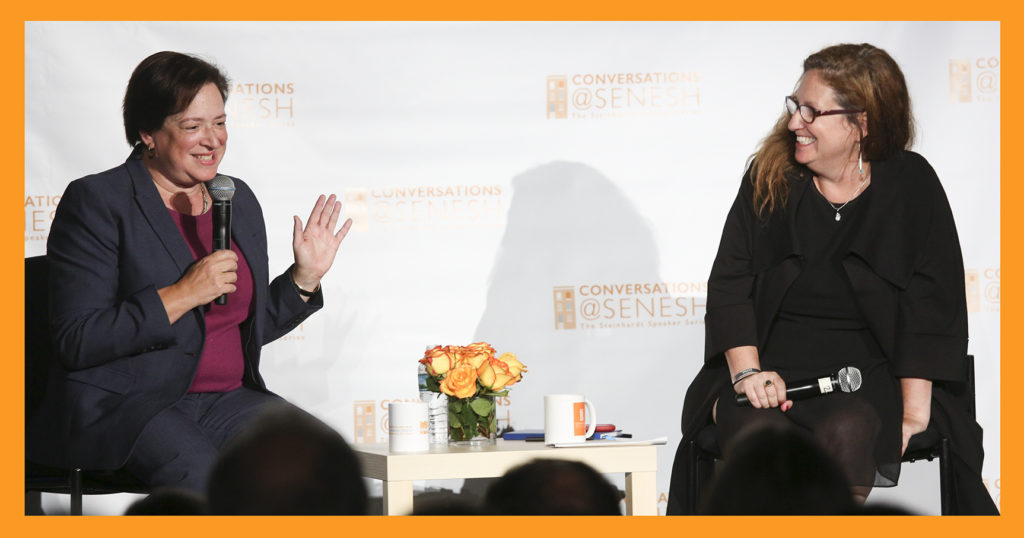 Years before she became a U.S. Supreme Court Justice, the first female solicitor general, and the first female Dean at Harvard Law School, Justice Kagan was the first girl to have a bat mitzvah at Lincoln Square Synagogue in Manhattan. On September 12, she will speak about the Jewish experiences that have influenced her life and career.

The lively, thoughtful and fun evening was moderated by award-winning journalist Dahlia Lithwick, a Senesh parent who writes about politics and the courts. A senior editor at Slate, Lithwick also hosts the podcast Amicus, which focuses on issues facing the Supreme Court. She is currently writing a book for Penguin Press about women and the law.

Conversations@Senesh invites influential public figures to reflect on the Jewish values that shape their lives. The speaker series highlights the strong connection between timeless Jewish values and modern professional accomplishments that continue to improve the world. Previous speakers in the series have included Gloria Steinman, Olympic gymnast Aly Raisman, and authors Nathan Englander and Gary Shteyngart.

“It is an enormous privilege to welcome Justice Kagan to Senesh,” said Nicole Nash, Senesh Head of School. “Our entire school community is inspired by the path she has taken and by her remarkable achievements. Justice Kagan represents the values that guides our school every day.”

Elena Kagan, Associate Justice, was born in New York, New York, on April 28, 1960. She received an A.B. from Princeton in 1981, an M. Phil. from Oxford in 1983, and a J.D. from Harvard Law School in 1986. She clerked for Judge Abner Mikva of the U.S. Court of Appeals for the D.C. Circuit from 1986-1987 and for Justice Thurgood Marshall of the U.S. Supreme Court during the 1987 Term. After briefly practicing law at a Washington, D.C. law firm, she became a law professor, first at the University of Chicago Law School and later at Harvard Law School. She also served for four years in the Clinton Administration, as Associate Counsel to the President and then as Deputy Assistant to the President for Domestic Policy. Between 2003 and 2009, she served as the Dean of Harvard Law School. In 2009, President Obama nominated her as the Solicitor General of the United States. A year later, the President nominated her as an Associate Justice of the Supreme Court on May 10, 2010. She took her seat on August 7, 2010.

Conversations@Senesh invites influential public figures to reflect on the Jewish values that shape their lives and drive their accomplishments. We hope the themes that emerge from these talks will inspire dialogue in our Senesh community and our thriving Brooklyn neighborhood. Conversations@Senesh has been generously funded by Judy and Michael H. Steinhardt.

Hannah Senesh Community Day School is an exceptional, co-educational K-8 community of learners. Our unique program offers students and their families a strong tradition of academic excellence, along with a welcoming and inclusive environment of religious and cultural integration. “Community” is not just part of our name–it is truly central to our identity. Our students are drawn from a diversity of Jewish backgrounds, and our community includes many varied voices and perspectives. What unites us all is a commitment to raising lifelong learners, motivated by passion and creativity, dedicated to building connections, and inspired by kindness and respect. Hannah Senesh students embody the values of a rich Jewish tradition while embracing the promise and possibility of the modern world.