On May 3, 2021 at 8:00pm ET Senesh held a virtual conversation with two-time James Beard Award-winning culinary historian and food writer Michael Twitty, moderated by WNYC and NPR Journalist Matt Katz. Mr. Twitty discussed what food tells us about our lives and our histories, reflected on the culinary intersections of Black and Jewish food traditions and on his own Black, Jewish, and gay identities. 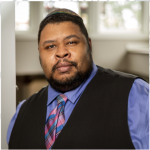 Michael Twitty’s 2017 book, The Cooking Gene, which traces his ancestry through food from Africa to America and from slavery to freedom, was a finalist for The Kirkus Prize and The Art of Eating Prize and a 3rd place winner of Barnes & Noble’s Discover New Writer’s Awards in Nonfiction. It won two 2018 James Beard Awards, for Best Writing and Book of the Year, making him the first Black author so awarded. His follow-up book, Kosher Soul (forthcoming from HarperCollins, 2022) explores his blending of African American and Jewish food traditions. Michael Twitty publishes widely and blogs at Afroculinaria.com and has appeared on numerous television shows. He published his latest cookbook Rice in February 2021. His piece on visiting Ghana in Bon Appetit was included in Best Food Writing in 2019 and was nominated for a 2019 James Beard Award. Mr. Twitty has a hit spice line based on The Cooking Gene and a recent special guest appearance on Michelle Obama’s Waffles and Mochi show on Netflix. 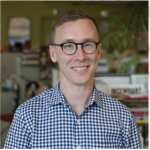 Matt Katz is a journalist at WNYC and NPR, where he reports on immigration, domestic terrorism, and local government. He occasionally guest-hosts WNYC’s The Takeaway, All Of It, and Brian Lehrer Show, interviewing newsmakers, journalists, and filmmakers. He covered New Jersey Gov. Chris Christie for more than five years, first for The Philadelphia Inquirer and then for WNYC, where he and his colleagues won a Peabody Award for their coverage of the Bridgegate scandal. In 2016, Matt’s biography of Christie—American Governor: Chris Christie’s Bridge to Redemption—was published by Simon & Schuster. Matt has written about immigration and politics for The Washington Post, The New York Times, The Atlantic, and Politico. Before covering the Statehouse in Trenton he spent time in Afghanistan, writing a series on reconstruction efforts for The Philadelphia Inquirer that won the Livingston Award for International Reporting for journalists under the age of 35.

Proudly funded with the generosity of UJA-Federation of New York