Another successful week in 5th Grade! On top of our studies, we went to the Rubin Museum and explored some fascinating Himalayan Art. In addition, we celebrated Yom Haatzmut and Yom Hazikaron with activities, games, and guest speakers. We celebrated the State of Israel while remembering those who help preserve and protect it. Shabbat Shalom!

In Humanities, we continued our unit on Revolution is Not a Dinner Party by diving deep into character motivations and taking on the personas of different characters to explore their points of view during important plot points. In Social Studies, we reflected on our trip to the Rubin Museum and how it could inspire our own China Museum project. We look forward to seeing everyone on June 4th!-Tony

The past couple of weeks we have been learning and reviewing operations with decimals. Students were give a chance to create their own menus and act as restaurant owners and customers. They welcomed their classmates to their restaurants, took their orders, and calculated their totals. The “customers” then had to calculate the tax and tip. Everyone had a blast. Next, we are going to be working on estimating decimals and unit conversions.-Katie

This past two weeks we have been learning about all of the big waves of aliyah and some important documents that made them possible. Some examples are the White papers, and the Balfour Declaration. We also have been watching a movie on Joseph, and comparing it to the Torah. Finally, for Yom HaShoah we learned about how people fought back (or resisted) when times were hard during World War Two-Eden

Last Friday we concluded our Yom HaShoah unit on resistance during the Holocaust by hearing survivor Fred Schoenfeld about his experience as a child surviving the war in Czechoslovakia by hiding his his father’s storehouse, a farmhouse and finally in the mountains with a mix of Russian, Polish and Jewish partisans. I was very impressed by the thoughtful and insightful questions that the fifth graders asked.  It was so nice to see many parents there. If you were not able to be there, make sure to ask your child about the speaker’s story.-Phyllis

Science had a wonderful field trip to the Hayden Planetarium. We watched a movie called “Dark Matter” then students explore the space exhibits of the planetarium. It was wonderful to hear students say how much they enjoy the trip at the next science class. After the trip students explored the phases of the moon and facts about the solar system planets. We conducted a demonstration where students had to be the moon, Earth, and sun. This was interactive and fun to watch students orbiting each other. During the next class students had to put together a fact puzzle about the planets, they double checked their work using an interaction website filled with solar system facts. We will continue to explore astronomy and start investigating how rockets function in the following weeks.-Mike and Sammi

We learned about Yom Ha’shoa and Yom Hazikaron (Memorial Day) for fallen Israeli soldiers. We also spoke about Yom Ha’Atzmaut (Independence Day). We learned dialogue about “having” and “not having.” In addition, we continued learning past tense.-Anat 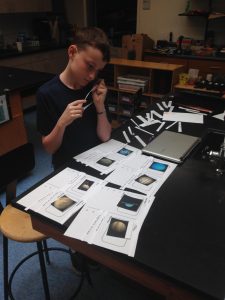 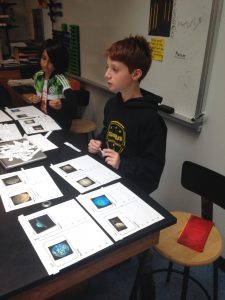