We hope you have had a sweet beginning to 5779!

Last Thursday, some third graders had the opportunity to work with Anne and half of the seventh graders in the garden. Together, they helped move the nutrient-rich dirt (aka compost) onto the flower and vegetable garden, helping to keep it healthy. 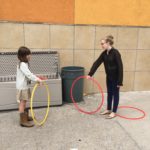 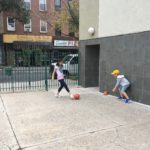 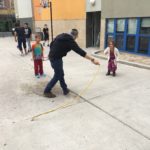 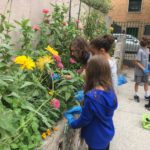 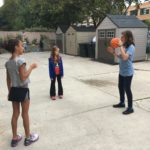 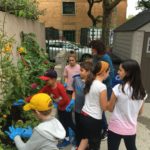 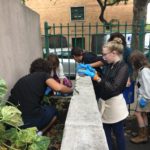 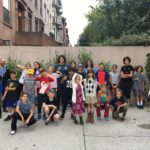 Throughout the week of September 24, students were also able to eat their lunch under the sukkah (weather abiding)! What a special opportunity!

On Wednesday, September 26, students interacted with their individual buddies by creating sukkahs out of graham crackers, marshmallow fluff, icing, mini M&Ms, green apple Twizzlers and mini chocolate chips. During this time, they were able to talk and get to know one another, It was a morning filled with messy-fun! 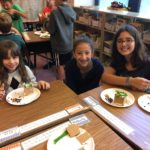 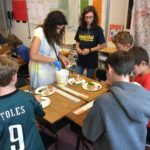 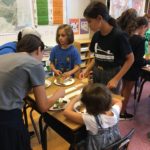 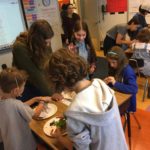 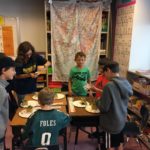 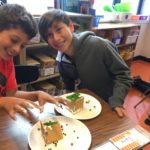 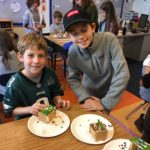 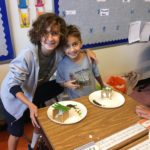 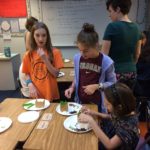 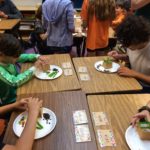 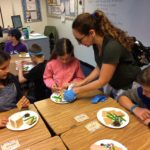 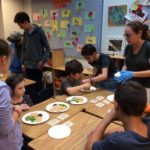 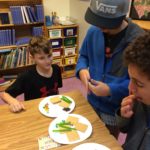 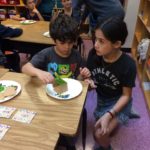 Over the past two weeks, students have been diligently working on their seed ideas in writing. We have worked on two strategies to come up with ideas:

This week, we came up with a list of what we find really hard in writing — many of which even teachers have trouble doing! From this list, we then came up with ideas to overcome our trouble.

In reading, we have been getting opportunities to sit and read. We have been working on our stamina, seeing how long we can read quietly. One area we are doing really well in, is reading a book throughout a period without getting up to change books every two minutes. We have also shown our respect to students working with Hilary by providing a quiet work environment. 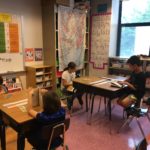 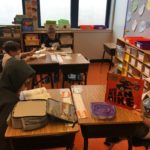 In math, we are reviewing place value positions, comparing numbers, and putting them in order. We realized how closely we need to read the directions, to see that sometimes we order them from highest to lowest, and other times from lowest to highest. Many students remembered learning, in 2nd Grade, that we can remember the direction of the greater/less than symbol by thinking of an alligator — it wants to eat the biggest number. So > means “# is greater than #,” while < means “# is less than #.”

During Social Studies, we have continued learning about New York State (NYS). Did you know that there are 62 counties? Some of them have smaller populations, while others — like Brooklyn — have a HUGE population. The difference in the size of the counties is what helps candidates running for election know where to put more effort. For instance, in the NYS democratic primary, the race was really between Letitia James, Zephyr Teachout and Sean Patrick Maloney. If you just look at the map (found in the New York Times), you would think that Mr. Maloney won because he won a majority of counties, or you would think that it was a tie between Ms. Teachout and Mr. Maloney because they won a similar number of counties. Yet, because Ms. James won important southern counties, such as Brooklyn, and Queens, she beat out the other candidates by over 137,000 votes! In our half groups, we watched the following video to learn the county names, such as Cayuga, Allegany and Clinton. You can watch the video here: NYS Counties Song. We recommend you continue to have conversations with your student about the upcoming November election!

Yesterday, we started learning about the branches of government — did you know they are the same for NYS as they are for the United States? While those in charge of the executive branch have different roles, the judicial and legislative branches help to make sure everything is balanced — which is why it is called “checks and balances!”

Conversations starters, with your student:

Keep an eye out, in future blogs/emails, for the many trips we will be having.

Judaic Studies with Aliza and Margaret:

Third graders have been very busy celebrating the holiday of Sukkot and learning about its symbols, laws, and traditions. We talked about the Arbah Minim (four species: Lulav, Etrog, Hadasim, and Aravot) and how they stand for the four systems that make up one body and the four types of people that make up a nation. We also learned excerpts from the celebratory prayer ‘Hallel’, which we say on the major happy holidays of the year. Finally, we met up with our 7th grade buddies to build (and eat!) graham cracker Sukkot, courtesy of the PA.

This 2 weeks the third grade continue to work on the song “Matana Lrosh Hshana” . We practiced the new vocabulary, review singular and plural, and the form of have and don’t have (Yesh Ein). Also the students worked on comprehension speaking and completing sentences using the vocabulary. In enrichment class the student listen to a short story and worked on comprehension and vocabulary. In addition we started to practice yoga in Hebrew and combine it with the social emotional activity of this week – Listening.