We hope that everyone had an enjoyable Thanksgiving break. We are thankful for getting to spend our days with each of your students. Read on to find out what we have been learning in fifth grade.

The students have continued working on their research essays. After taking notes from a variety of online and print sources, they learned how to organize the notes into categories which translated to the body paragraphs of their essays. Once the notes were in categories, we worked on writing an introductory paragraph beginning with a hook, followed by background information, and ending with a thesis statement. The students spent this week writing the body paragraphs, peer editing, and making final revisions to their essay in advance of our Conference on Civilizations next week.

During reading time, we continued Wonder. There was an eruption of applause in the room when we learned that Jack Will and Auggie mended their relationship and became friends again. Now there is a war among the fifth grades centered on Jack and Julian. We also met a new character, Justin, who is Via’s boyfriend. This week we will read from his point of view. In response to the reading that we have been doing, we will have a class discussion where each student must take a side and explain why they chose their position. Some of the questions we will be pondering are: “Is Julian’s mom a good or bad parent in your opinion?” “Should Jack Will have been expelled for punching Julian?” and “Does everyone need to be friends with everyone else in fifth grade?”

This week we finished our first Chumash unit, ending with Joseph’s two dreams. We used Instagram templates to show the elements of his dream and think about the reactions of people who saw his “post”. Students did a great job labeling the dream with the Torah text and rooting their creative responses to the post in what they knew about the character’s responses in the text.

We are now on our first Aliyah unit. We began by exploring what “Home” means to us and what a “Jewish Homeland” means to us. Students reflected on “bricks” and then built a home practicing skills of working in a group. This unit will be heavily based on perseverance and recognizing our motivations as well as learning to work for the benefit of the community in a kind way. We will be exploring these themes in advisory as well. Students got to see the “ancient” Aliyah diary in my room. This is a diary showing entries that go all the way back to the Torah showing the ancient desire for the land of Israel. They then read some entries written by past students who reflected on their class aliyot that they wrote as they were acting out their characters in the coming units. It was so fun to see students find entries from their siblings and get excited to write their own entries that will be a part of this book. We learned about the early religious Aliyot by getting into the character of the young religious college age students that moved from Europe in the 1700s. They also learned about the Ottoman Empire, the government in rule in the Land of Israel at the time.  Next week we travel in time to the 1800’s and experience the 1st Aliyah from Russia. Please don’t be alarmed if your child comes home to tell you that they are married with children, planning to Make Aliyah and that I changed their names!
Shabbat Shalom,
Laura
Math:
This week we continued learning about the wonderful world of fractions! We are starting with multiplying fractions this week to prepare for our project next week. Students will be building a (miniature) dog house, planning everything from the measurements to buying the materials. I will send pics once their projects are done!

Hebrew Heritage:
,להורים יקרים
במסגרת היחידה של אנשים עם מוגבלויות צפינו בסרטון “הגביע שלי” מטעם עמותת אילנות. הסרטון דן ביחס של הסביבה הבית ספרית כלפי ילד עם מוגבלויות וכיצד יחס זה משפיע על אופן בחינתו של הילד ביחס לעצמו וליכולותיו. במסגרת יחידה זו התלמידים יכינו פרויקט שבמהלכו יבחרו להתמקד בארגון  המסייע לילדים עם מוגבלויות שונות בחברה.
שבוע הבא ביום שלישי יתקיים מבחן בעברית, התלמידים קיבלו הוראות מה המבחן יכלול.
,סוף שבוע טוב
אילנה
Hebrew:
In Hebrew class,  students worked on their Hebrew project which is related to writing and creating a narrative about a place.. After learning about Touro synagogue in Rhode Island,  everyone chose a synagogue which they wanted to write about. Students researched information and learned many things about different synagogues in the world. They wrote their projects in Hebrew by using words and grammar rules that they learned in class.
Science:
Over the last two weeks, the 5th graders have been designing and testing parachutes by moving through the engineering design process and the scientific method. Students had a variety of materials to choose from and they needed to balance the two main factors that affect air resistance- weight and surface area. For example, pipe cleaners can hold the parachute open better than string, but would the pipe cleaners add too much weight to the parachute? Right away, many students tried to build the largest parachute possible using large plastic bags. The thinking was that these large bags would have the greatest ability to catch a lot of air. However, many students quickly learned that because we were only dropping the parachutes from 9 feet off the ground, these bags were too heavy and they did not have enough time to catch air. So back to the drawing board they went! Students are now wrapping up this lab by working on their analysis. They learned how to make and edit a bar graph for the class data in Google Sheets and will be writing their conclusions next week. 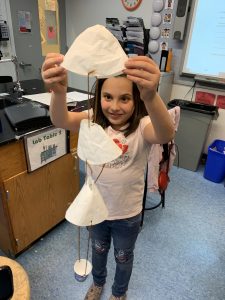 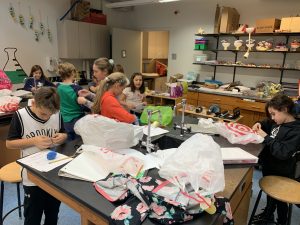 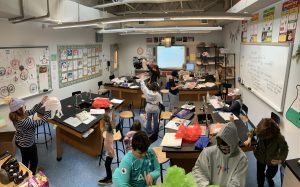 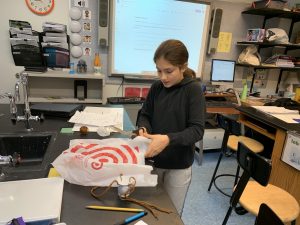 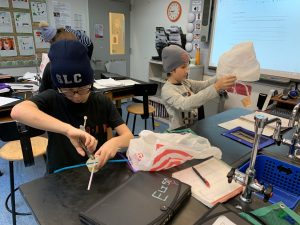 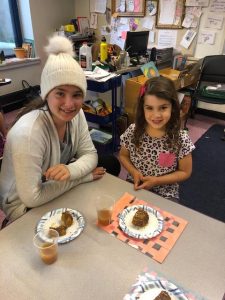 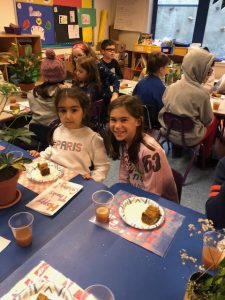 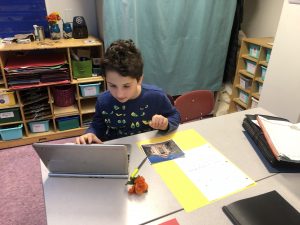 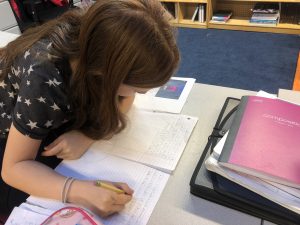