What an amazing few weeks of learning and community growth! Read on to find out what your fifth graders have been up to in each class:

Inspired by last week’s Climate Strike, advisory this week focused on learning more about the science behind climate change and what can be done to stop and reverse the effects already being seen. The students wrote letters to their representatives, speeches to congress, created presentations and wrote songs/raps to express their frustration at a lack of action.

We are under way with Wonder! Much excitement filled the room this week as we read the first several chapters of our class novel, Wonder. We met our protagonist, Auggie and used evidence from the text to determine how he identifies himself internally and externally. We also met some of Auggie’s classmates and had a great class discussion about “put-downs” and how others can be unkind in explicit or more subtle ways.

During our writing classes, we began brainstorming ideas for a personal narrative by thinking about powerful moments in our lives. Through the prompts “the first time I…. and ” “the last time I….” we made note of moments in our lives where we learned a lesson or came to realize an important value.

We completed reading the book Seedfolks, which tells the story of a community that comes together around a garden. This week, the class wrote themselves into the Seedfolks community through a new chapter in the book and worked other projects related to the book. We finished our week by working in the school’s garden. The class harvested basil and gave it to our first grade buddies as a gift and also helped to spread compost. This will kick off our work about ancient civilizations and the communities in those civilizations beginning next week. 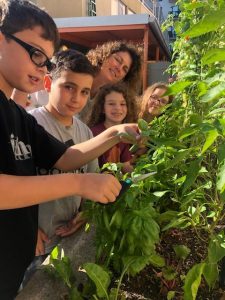 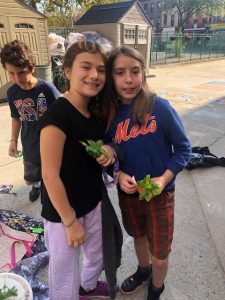 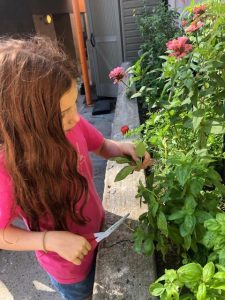 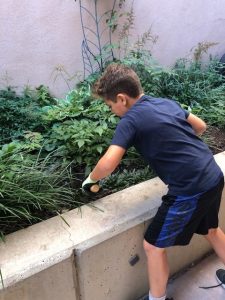 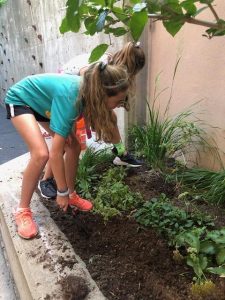 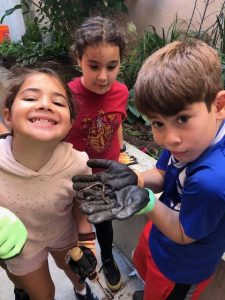 This week we finished Unit 1. We have learned different ways to represent large numbers, including expanded form and written form. We have rounded and compared large numbers and built numbers based on place value. This week, we also finished our first end of unit project. Our next chapter will on whole number multiplication and division.

We have worked hard getting ready for Rosh Hashanah! Students looked deeply at the first of the three steps to having a great new year. Teshuva!! We looked beyond the idea of repentance and thought about what it looks like to return to our best selves. We translated Rabbinic text that helped us know the steps to doing so as well as a text talking about the impact of our own reflections on the world. Students made art and skits to express these idea and to practice what it would look like practically. While I was away at TEVA students worked on the second step, Tefillah (prayer). They read the story of Jonah and reflected on how Jonah was doing Teshuvah as well as Tefillah. We also began our Chumash unit. Before getting into the Joseph stories we are reviewing Jacob’s life and the stories from last year. By looking at Jacob as a child we are going to be able to look at our big idea, ” How does our past affect our future”?  Students reflected on this question in their personal life as well as in what they know about Jacob’s life as Joseph’s father.
Wishing everyone a Sweet New Year! Please look out for a Judaics Family Source Sheet for the High Holidays.
Shana Tova and Shabbat Shalom,
Laura
Hebrew
During the last two weeks we have been focusing in class on the topic: “new neighbors.” The students learned new words and expressions. They presented their work in class in both writing and speaking. Additionally, the past tense was introduced in a systematic way as students get used to writing about events that have already happened. This students also received a workbook on the topic “important people and biographies” which we will use and learn from  throughout the year. 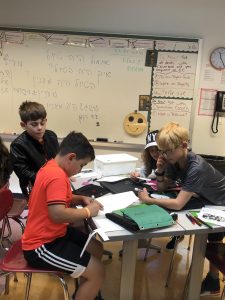 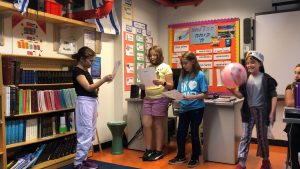 Over the last two weeks, the 5th graders have participated in their first engineering challenge of the year. Their task was to design a catapult out of popsicle sticks and rubber bands that would send a cotton ball the furthest distance. The students were very excited as they jumped right into the challenge, wrote a hypothesis, drew a design, and started experimenting with different options. After a full class of building, testing, and modifying, students ran a 10 trial test and found their average distance. Then, in the next class, students continued the engineering design process by drawing a modified or new design, writing a new hypothesis, and building / testing their improved catapults. The 5th grade scientists have been eager and hard working learners so they could accomplish the most with their time. 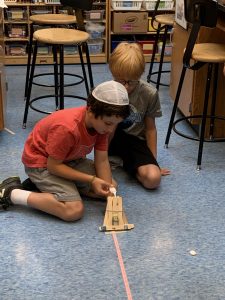 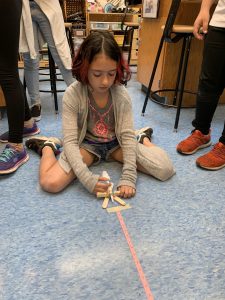