We are so proud of the 3rd grade students for their moving performances during the Hannah Senesh Tekes.
All the childrens’ Venn Diagrams written for the occasion are  currently on display outside our classroom. It’s simply moving to see how much in common the students have with our inspiring namesake.
We are so excited to share that we have started learning Chumash!
We are learning “Lech Lecha” (Genesis 12:1).
This story describes how Abraham and his wife Sarah follow God’s call to journey to the land of Canaan.
We tried as a group to better understand Abraham’s dilemmas.
How did Abraham feel when he had to leave his homeland behind?
What could have been some of his concerns or fears travelling to an unknown land?
We concluded that this is not only something that affected Abraham throughout history but rather many of our families had their very own “Lech Lecha” experiences as well. The children were very eager to share their own “Lech lecha” experiences and are looking forward to exploring this concept in a deeper way with their special guests on Kesher day.
We continue having fun with the Shinshinim. They took us on an imaginary bus tour to explore Israel through our senses. We played fun games together. It was so much fun! 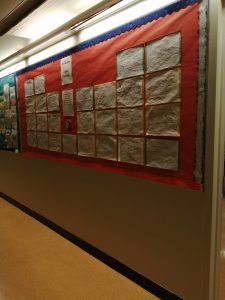 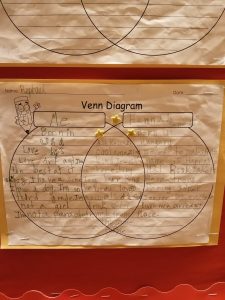 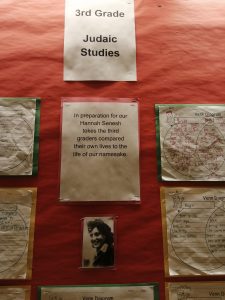 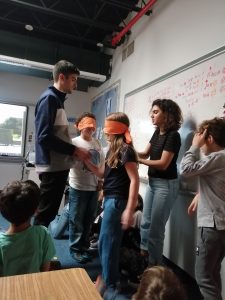 In the past two weeks we continued to expend our vocabulary in order to describe a friend’s appearance and characteristics. We enjoyed singing the song ״חברים בכל מני צבעים״ and continued to discuss different types of friends.

You can listen to the song here https://www.youtube.com/watch?v=Gr2oLbhG_CY

In addition, students read the book aloud to a partner so as to improve our reading fluency.

In writing, as we continue to increase our vocabulary related to adjectives, we wrote “a lost pet announcement”. The flyer had a picture of the pet and descriptions which based on the vocabulary that we studied in this unit. We made sure that we wrote the most important information and enough narratives for people to easily identify the pet that was lost. But no worries, nobody’s lost … we just practiced how to describe our animal friend with our proper words in Hebrew. 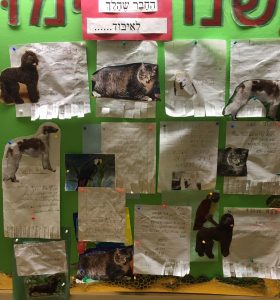 It was wonderful seeing so many of you at  conferences, and getting to gloat about how amazing your students are! These kids have so much to be proud of, and I loved seeing your reactions to their writing projects.

This week marked our FIRST field trip of the year! With the support of four parents, Rimma and I accompanied the class north to the Battery Park area to explore native history and some background information for our future New Amsterdam study.

When first arriving at Bowling Green, we turned around to see the building for the National Museum of the American Indian, which is formally known as the Alexander Hamilton Customs House and less well known as Fort Amsterdam. We looked at the architecture and decor of the outside of the building, focusing on four specific statues standing across the facade of the entrance. Each statue represents a different continent (or a mixture of two continents, for one of the statues) who traded with America in the 1800s.

After entering the building, we went into the classroom for an interactive portion. The class was divided into four groups, and each group studied an aspect of Eastern Woodland life. One group group looked at a map and had to identify where flora, fauna, and headings of rivers or tribes would go. A second group looked at different types of canoes that were built, as well as identify different types of animal pelts. A third group looked at quahog and whelk shells, which made wampum, as well as the tools used to create wampum. The fourth group looked at wampum belts and talked about their significance. As a whole group, we discussed why each were important, and how/why it related to Europeans coming in the 17th Century. 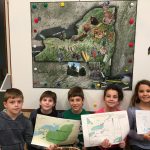 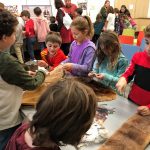 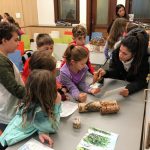 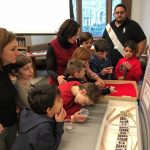 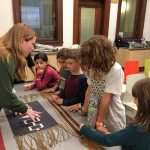 After, we made our way to the Taíno Exhibit (closing Wednesday, November 13), looking at artifacts of the people (both before the time of Columbus, in 1492, as well as more currently created artifacts), and the history of the tribe. This brought about the very important question of: Why do we celebrate Columbus, and give him a special day, when he was horrible and killed so many people? Our wonderful chaperones willingly discussed their education about Columbus, and how we used to idealize that “first” explorer who “discovered” America — or the India of the West, the West Indies. This conversation will be continued next month when we discuss many of the different encounters had in the Americas.

The next stop is the museum’s permanent exhibit, which showcases various artifacts from the many people of America. We saw artifacts from those in the Arctic, Southeast Plains, Northwest Coast, mountains, Central America, Eastern Woodlands, and more! The class eagerly explored the different areas of this exhibit, noticing what pieces were made of, and comparing clothing of the various regions.

At the end, we did a small walking tour of the area. We looked at the monument placed on the original coastline of New Amsterdam, and talked about what we noticed. The students were amazing with deciphering the Dutch words, and we were able to find specific words we knew like Amsterdam, Fort, New, April, Manhattan, and more! We then walked over to the area by the Brooklyn Battery Tunnel to explore two of the three monuments on the building which (spoiler alert — students don’t know this yet) are emblems from the New York State and New York City flags! We then trekked to the subway as flurries of snow slowly drifted down around us.

Conversation starters with your student:

– what type of artifacts did people of Native Tribes use or wear that we ALSO use/wear?

– where was the water line, in relation to Fort Amsterdam, in the early 1600s?

– what are YOUR thoughts on Columbus Day, and why?

Shabbat Shalom to you all!

We’ve been learning about New Amsterdam and the Lenape Native Americans in social studies. Iviva helped us research the tools, clothing, musical instruments and pictographic writing the Lenape used. We viewed images of moccasins, flutes, scrapers, combs, wampum belts, canoes, needles with thread, stones with visual writing (different from the alphabets we’re used to). We then used air dry clay and paint to sculpt our own “artifacts.” We will continue adding details to these objects in the next weeks. You will get to see them at our upcoming Publishing Party.

While most of us worked in clay, some of us continued weaving to make our naturally dyed color wheel. A few of us decided to handweave our Lenape artifacts. 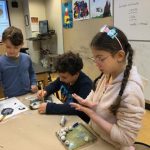 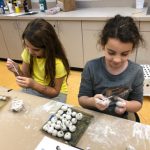 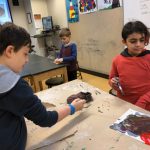 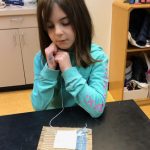 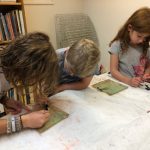 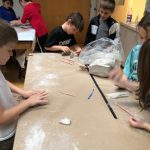 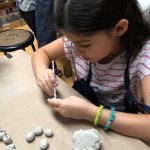 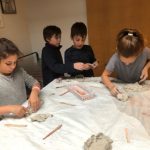