On Friday, November 1st, students had their second trip to Brooklyn Landmark Elementary School. They read the book The Good Egg and lead students through a few comprehension activities. 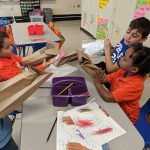 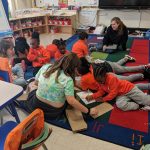 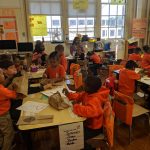 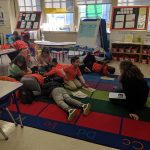 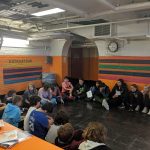 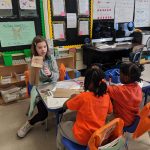 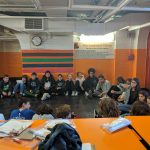 Israel 7 with Phyllis and Ilana NB
Israel class is getting exciting as the students received their character profiles last week!  Each student was assigned a profile that included gender, country of origin, birth date and a date of aliyah.  The dates of aliyah correspond to the waves of aliyah from European and Arab countries post-WWII and the establishment of the state of Israel.  Students started this year long project by creating Jewish names and passports for their characters in the language of the country of origin.  They will continue next week by researching the history of Jews in the country of origin during the years prior to aliyah.  Throughout the year students will build upon the story of their character as they learn each successive unit of Israeli history.  At the end of our Israeli history units, around March, the students will have compiled a scrapbook that depicts the journey of their character.
Humanities
In English/Language Arts, students continued reading Julius Caesar, analyzing the text, and writing high-level paragraphs about what they noticed. Students also began preparing for their first cumulative vocabulary test, which took place on Wednesday, November 13th. To prepare for the test, students studied in a variety of ways. However, one that stands out is conducting vocabulary interviews. Students were asked to interview students and staff about their experiences, memories, and stories associated with a particular vocabulary word. For example, are you a strong ORATOR? And, what’s a moment when you were filled with MIRTH? When we associate a new idea or word with a memory or a story, we can add this concept to our knowledge base in a deeply powerful way.
In social studies, students finished their examination of ancient Rome. Additionally, they demonstrated their progress in a test on Chapter 11. In part of the test, students were asked to write clearly about history and had to employ a variety of strategies in their writing. Looking forward to seeing these writing skills transfer to other assignments!
Hebrew Heritage
להורים יקרים,
שמחתי מאד להיפגש איתכם ביום הורים.
השבוע סיימנו את עבודתנו הדנה במרכז הייחודי “נא לגעת” הנמצא בתל-אביב – יפו בו עובדים אנשים עיוורים וחרשים כמלצרים ואנשי תיאטרון. במסגרת זו דנו בשאלות על תפקודם של אנשים עם מוגבלויות  בחיי היום יום וכיצד החברה בוחנת אותם. התרגשתי לשמוע שחלקכם  ביקרתם במרכז וחוויתם חוויה מיוחדת. במסגרת הנושא הזה התחלנו לקרוא סיפור קצר בשם החייכן של יצחק נוי הדן ביחס השיפוטי שלנו כלפי אנשים רק לפי המראה שלהם.
סוף שבוע מהנה,
אילנה
Math

Did you know that within the digits of pi everyone in the world can find their birthday? That’s something the 7th grade learned when they explored Real Numbers.

Pi is an irrational number, meaning it’s a continuous decimal number. Unlike rational numbers which contain terminating decimals, which are decimals that comes to an end, and repeating decimals, which are decimals that are continuous but have a repeating pattern, irrational numbers go on and on and on with no pattern in sight!
If you’re curious about which digits of pi contain your birthday, you can find out on this website: http://www.mypiday.com/
Hebrew
K – The last two weeks during Hebrew class students reviewed and enriched their vocabulary and grammar rules in Hebrew on the topic “Me and My Room.” We described our rooms using new adjectives and new learned objects. In class we familiarize ourselves with different types and styles of texts like story, poem, song, dialogue and article. So, throughout this week we read the poem “I’m not a girl of the chair” which talks about a girl who didn’t like to sit down on a chair when she did any work . The students learned new words and new expressions in Hebrew. Some of them identified with the girl from the song.

J – We started to learn new topic “Roll in the Galil and the Golan.” This new topic describes the North of Israel and is part of a unit which helps students expand narratives. We began our virtual journey to Galil (name of part of Israel) from Pki’in. Through Hebrew language the students have a chance to learn about the history of Israel, different nationalities and cultures in Israel.

To mark Hannah Senesh’s Yahrzeit, we spoke with students about her life and her songs and poems. They were excited to learn a new poem by Senesh and to be able to discuss it in Hebrew.
Science

Students have been focused in each science class in order to continue creating their Rube Goldberg machines. With positive group collaboration and determination for success, students have been handling challenges as true professional engineers. We will continue to work on these projects and start focusing on the technology components of their machines. Time is flying fast, soon it will be Friday, December 13 when we present these projects in the gym. More information about this Rube Goldberg STEAM event will be coming soon. 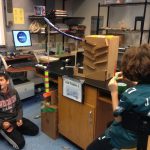 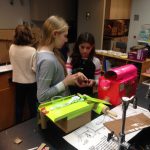 7th graders are nearly done with our first unit for the book of Bmidbar/Numbers: can Bnai Yisrael build a community in the desert that will help them to recover from the trauma of slavery; bond as a group; and grow as individuals? Students have excelled at translating and discussing the Torah text, building grammar skills, and learning how to ask powerful, text-based questions. We’ve also done some skits! 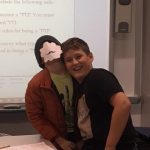 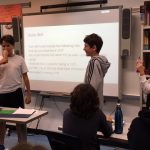 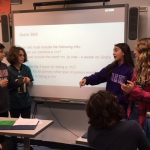 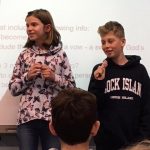 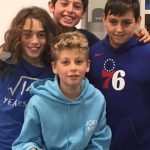 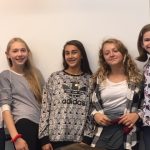 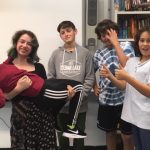