This week in ELA, students are beginning our 8th Grade unit on Elie Weisel’s Night. Throughout the next 5 weeks, students will explore the essential question “How do one’s circumstances and experiences of trauma shape their identity?” Using the idea of the Universe of Obligation, students will work through the difficult terrain of choice in the face of absolute horror and devastation. I must admit that this is a particularly difficult text to teach, but as always, I am impressed with the 8th grader’s sensitivity and nuanced understanding of complex readings.

In Social Studies, students are exploring key concepts in the Constitution, including popular sovereignty, limited government, republican democracy, separation of power, checks and balances, and federalism. Ask them to explain each concept to you! They are now experts. 🙂 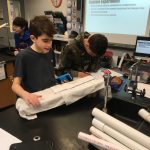 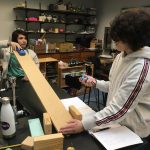 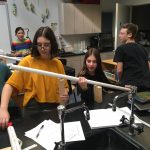 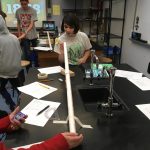 Students have started their unit of physics of motion. Students each week will focus on a physics topic and conduct two experiments. One is provided to them in order to understand the concept and variables behind the physics concept. The other experiment is created by them in order to be creative and understand the different variables that need to be considered in their experiment design. This week’s topic was velocity. Everyone conducted themselves as focused scientists and collected data accurately in order to report results. We cannot wait to continue this unit in the weeks to come. Our next physics topic will be acceleration, I look forward to more of their custom experiments around acceleration

This unit on factoring is an important prerequisite to learning about quadratic functions and understanding them in depth. There are only a few units to go before the 8th grade spends some time reviewing everything they learned in Algebra I and expanding their knowledge of those concepts.

להורים שלום,
השבוע סיימנו לקרוא את הסיפור “הפרה על שם ורגיניה”, התלמידים עבדו על זה בעזרת דפי עבודה בהם נדרש מהם לתרגל כתיבת תשובות מלאות, כמו כן הבנת הנקרא. תרגול זה במהלך השבועות האחרונים סייע בידם להתכונן למבחן שנערך ביום רביעי. במהלך הזמן שנותר חזרנו לעבוד על הפרויקט שהתחלנו לפני החופשה “אנשים עם מוגבלויות”, כל תלמיד ערך מחקר אודות הארגון שבחר וכתב עליו 3 פסקאות והציג אותו לכיתה  – כל הכבוד!
סוף שבוע טוב,
אילנה
HEBREW
Dear parents,
These have been extremely productive weeks for the 8th grade. Hebrew K has been practicing describing the world in the past, using Anne Frank’s story as an example. Next, we practiced describing the world of the future using the verb TO BE.
Hebrew 8J has been discussing life in the kibbutz and practiced using names of professions when discussing what people in Israel do.
In addition, both groups have been practicing how to interview a friend in Hebrew.
I wish everyone a relaxed weekend,
Andreea
Judaic Studies
8th graders finished creating and presenting their own responsa for an actual medical dilemma. They used a variety of rabbinic texts to support their reasoning, and engaged in lively debates about the ethical issues they raised.
We thought about why we celebrate Purim — the story of near genocide — with laughter, costumes, and celebration. What does that tell us about how to live with contingency and our own fragility? Next week we will look at Jewish views of alcohol and drinking, through the lens of Purim and other key texts. This will be a chance for 8th graders to think through an issue they are likely to encounter next year in high school in a safe place and from a Jewish perspective.
Shabbat shalom and chag sameach,
Jessica