We have been working hard learning and getting truly inspired.

We continue learning about food justice and we are getting ready to embrace our responsibilities as trash monitors in the lunchroom this upcoming week.

Every third grader will embrace their duty by helping educate the school on good practices for recycling. They will share their thoughts on all that we have learned and a topic that resonated with them.

We call this “Our statement”.

We have been learning new tefillot and we transition to a different siddur that contains most of the tefillot students recite in 4th grade.

Lastly, we are currently learning about Tu B’Shevat. We learned the story of Honi the Circle maker. We also learned the 7 species that are typical of Eretz Israel.

In Chumash, we continue learning the pesukim. We color coded different parts of the pesukim to decide based on the text which parts go together.

Looking forward to learning more in the weeks ahead!

This week, we finished a multi-week project: studying images of historic Dutch tiles and creating our own! We started by making a sketch based on a historic tile. After reviewing our sketch with Iviva, we copied the drawing onto an actual ceramic tile. The final step was tracing over our drawing with blue ink, to be consistent with the color of original Dutch tiles. When we finished our Dutch tiles, we started a new project: self-portrait drawings.

Below are images of some of our works-in-progress. 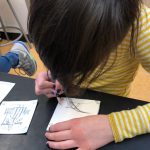 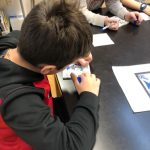 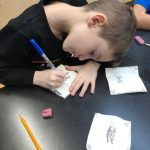 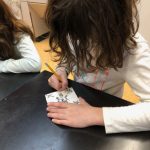 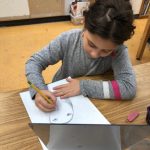 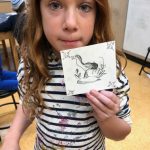 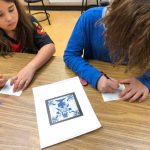 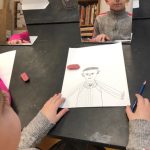 What an experience we had, this past Thursday, traveling back to the mid-1600s!

Yesterday, the Third Grade went on a field trip to The Wyckoff House Museum, in Brooklyn. It is the oldest standing house in New York City, built in 1652. During this year, Petrus Stuyvesant was Director of New Amsterdam, but Dutch and European Jews had not yet arrived in the New World. Before Stuyvesant, the people of New Amsterdam had already seen six Directors come and go, and they were working hard to prosper as a colony.

By 1652, Pieter Wyckoff had paid his debt as an indentured servant to a landowner near Albany, and had been working as a farmer for almost ten years. At this time, he built the Wyckoff House and farm for his wife and two children. What started as a one room house for thirteen people — similar to a studio apartment set-up in New York City (though with an outhouse instead of an inside bathroom) —  turned into a multi-room house on 20 acres of land. Eight generations of Wyckoff’s lived on the land from 1652-1901, and it was named a Historic Preservation building in the 1960s.

While in the first room of the house, the students explored the artifacts that were on display around the room. They were asked to find items that could be used to help with everyday life in the 17th century. One student noticed the spinning wheel, which was used to help make yarn for clothing. Another student noticed that there were many materials to help make candles, so they must have been important. Some noticed all of the pots and pans laid out in the stove/kitchen area of the room, called the hearth. One artifact looked like a musical instrument or an extremely old typewriter, and we were all surprised to learn it was a meat grinder. Who knew they had those back in 1652?! A surprising fact to many was that room we were in was multi-functional. It was used as the kitchen, the dining room, the workroom AND the bedroom. Large sacks filled with hay, leaves, and herbs, called hay pallets were used as mattresses, typically fitting 2-5 people each.

In the second bedroom, which Pieter’s grandson added onto the house, was the way they showed their new wealth. The ceilings were higher, windows taller (to let more natural light in), and the space itself felt bigger. As well, they had a cabinet to display certain items to represent their status, holding feather quills, a mortar and pestle, and plates.

We investigated more artifacts in this room, thinking about:

Students also explored a butter or cookie mold, yokes (to help carry buckets full of material), a clogs, a lantern, and a mortar and pestle. We then learned the purpose of an herbal sachet, and created our own sachets using dried chamomile, peppermint, OR lavender.

For pictures, of this trip, please click HERE to connect to a google photo drive!