Over the past two weeks, students prepared a lesson on Estela’s Swap for kindergarteners and first graders at Brooklyn Landmark Elementary School. We will ask pre-reading, during reading, and post-reading questions. In the story, Estela has a music box that she gives to someone. The younger students will draw, color, and write about their own music box. In preparing, 7th graders had to practice reading the book aloud and asking thoughtful questions of readers.

We are embarking on Week 4 of a new set of vocabulary. This set of vocabulary switches between Wordly Wise 7th grade words and Greek and Latin root words. Students will be asked to make connections between their new words and words from the Julius Caesar words. In ELA, we’ll also start reading Beowulf: A New Telling, an adaptation of the classic poem.

In social studies, students will begin studying the origins of Islam, as well as early African Civilizations.

The Israelites have begun their journey to the promised land, and things are not going so well! This gave the 7th graders a chance to raise many powerful questions. Why do people complain — especially when they’re traveling? What is problematic about the way Bnai Yisrael, Moshe, and God communicate with each other? How can Bnai Yisrael learn to trust God, after their many traumatic years of slavery? Students read and translated the text as well as medieval commentators, wrote thoughtfully about what they learned, and acted out part of the story! 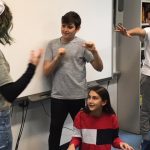 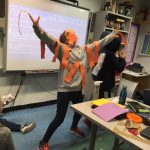 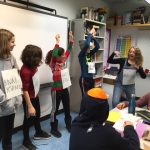 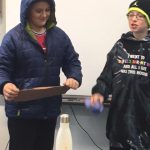 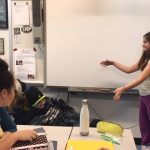 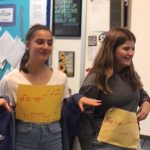 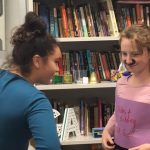 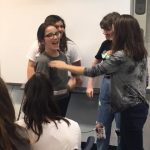 The 7th grade has entered the world of Algebra. They’ve learned about the purpose of letters (variables) in Algebra, the difference between a coefficient and a constant, how to write and evaluate algebraic expressions and formulas, and now they’re in the midst of learning how to combine like terms and simplify linear algebraic expressions.

After they learn about simplifying and factoring algebraic expressions, they will move onto solving linear equations in one variable! Linear equations have many uses in the real-world and people actually utilize the properties of linear equations in their daily thought processes without realizing it! Neat, huh?
Hebrew
7J group:
In Hebrew class we have continued to learn about the Galil area in Israel. Students studied the old towns of Zfat and Tiberias. They role-played tourist guide for virtual tours on these places. In addition, the students prepared a short TED talk in Hebrew on the topic they chose and presented it in class.
7K group:
In Hebrew class, as we continued to learn more adjectives and expend our ability to narrate by using short catchy phrases, we worked on the new topic: Advertisements. Students studied new vocabulary, grammar rules and expressions. They wrote advertisements for different items and showed their creativity and knowledge in Hebrew. They composed a short story for their advertisements by using previous and new vocabulary and learned grammar.
Hebrew Heritage
להורים שלום,
השבוע חזרנו לעבוד על הסיפור החייכן מאת יצחק נוי, קראנו את הטקסט ועבדנו על הבנת הנקרא, שוחחנו על משמעות הטקסט והרלוונטיות שלו לחיים שלנו. בנוסף הגיעו אלינו השינשינים שערכו פעולה עם משחקים שונים.
בשבוע הבא ביום שלישי יתקיים מבחן, הכולל חלק של הבנת הנקרא מטקסט ושימוש נכון של מילות קישור.
סוף שבוע נעים,
אילנה

Students are working hard to finish up their Rube Goldberg machines in time for the STEAM exposition next Friday, December 13 at 9am. These projects have been successfully created because of strong collaboration, engineering techniques and clever imagination. Come join us in celebration of their achievements.