By the Fall  2017 Journalism and Social Media Chug

Not only was Aly Raisman born in 1994, she was born to be a gymnast. Aly started gymnastics at an early age and quickly became a strong and confident competitor. Aly first became interested in the sport when she participated in a “Mommy and Me” gymnastics class at the age of two. She went with her mother, who was also a gymnast. Aly loved gymnastics from the very start and began training with coaches.

She wasn’t always destined for gold, however. When she was six, while the rest of her gymnastics peers went to the next level, she was held back. “My parents told me I was lucky because I get to take the class again,” remembered Aly. “So I thought I was the best in the class, even though I was the worst!” That confidence, the support from her parents, and her undying love for gymnastics kept her going even when things got tough.

When Aly was eight years old she was inspired by the 1996 Olympics. She decided then and there that she would stop playing any sport except gymnastics and that she would get to the Olympics in 20 years. Actually, It would only take her 14 years to compete in the 2012 Olympics.

Aly’s road to the Olympics came with many sacrifices. One of Aly’s first sacrifices was giving up sleepaway camp at the age of ten, when her coaches told her she would need to spend summers in the gym and give gymnastics her undivided attention.

She didn’t have an easy school life. In high school, she was bullied by the boys in her class. For example, during gym period, some boys made fun of her muscles. “I never wanted to wear tank tops,” Aly revealed, “because the boys said I looked like I was on steroids and that my muscles were disgusting.” She said they were intimidated by her because she would always win the chin-up contests.

Aly wasn’t able to graduate with her high school class because she had a competition on the day of her graduation. Thinking of this, she said, “hard days make you stronger.” She also gave up on the idea of going to college because she was training full time. Aly trains daily with the two coaches who have been with her for the past 13 years.

All of Aly’s hard work, got her to the 2012 Olympics in London, where she was a member and captain of the “Fierce Five” American team. She won gold medals in the team and floor competitions, as well as the bronze medal on the balance beam, making her the most decorated American gymnast at the Games.

She did a famous floor routine to Hava Nagila, which she said she liked for the beat. She said she didn’t realize that it would end up being a big moment for Jews around the world , but she is a proud Jew and is honored to represent the Jewish community.

After the first olympics, her parents didn’t want her to compete in the Olympics again because it was so stressful. She said her parents look like “psychos” when they are shown on TV cheering for her  in the stands because “they love me so much and want me to do well because that’s what I want.”

In June 2013 Aly went back to gymnastics training and participated on the American team at the 2016 Olympics in Rio de Janeiro, where she won a gold medal in the team event, making her and teammate Gabby Douglas the only Americans with back-to-back team golds. Raisman also won silver medals in the individual all-around and for floor exercise.

Since the 2016 Olympics, Aly has taken some time off from training to write a book, called Fierce: How Competing for Myself Changed Everything, which tells about Aly’s dedication, perseverance, and learning to think positive even in the toughest times.

“The book was hard to write because I had to relive the good and the bad,” said Aly, “I had to share things that nobody knew about me.”  If the book is a success, Aly said she may write another one later in her career.

We can’t wait to see what’s next for Aly Raisman and will be cheering for her in 2020. 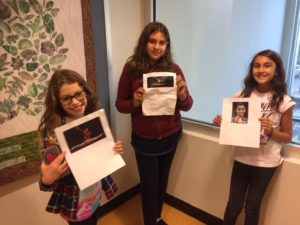 The Journalism and Social Media Chug is comprised of Orly Abel, Antonia King, Alison Heffez, Sylvie Lipskar, Sasha Medvinsky, Nomi Nimberg, Ronit Nolte, and  Leela Skolnick. Some members of the chug attended the Conversations@Senesh featuring Aly Raisman Meet and Greet event, some attended the moderated discussion with Senesh parent Virginia Heffernan, and all members of the chug did preliminary research and writing to produce this blog post.

Conversations@Senesh invites influential public figures to reflect on the Jewish values that shape their lives and drive their accomplishments, particularly our School’s values.

The members of the chug were impressed with Aly’s hatmadah/perseverance to succeed as a gymnast through tough times and her focus on chesed/kindness as she spoke out against bullying and stressed the importance of being a good person above all else.