In 6th grade humanities, we have been focusing A LOT on writing lately. Last week, we prepared for and then took an in-class argument/literary writing assessment. Students were asked to read a very short story and then respond with a well-organized and articulate paragraph. In their responses, students wrote about the protagonist’s feelings or personality traits and backed up their claims with both quotes and details from the story. This week, students had the opportunity to look over their individualized feedback and improve their essays. Some worked on crafting a more focused main idea, others worked on better connecting each detail back to their main idea, and still others worked on capitalization and punctuation. Each student immensely improved his or her work, and I’m hopeful they’ll remember these valuable writing lessons in the future! Next up, we will begin our unit on narrative writing, and use writing to reflect on our personal experiences.

In Social Studies, we’re continuing our study of ancient Greece. We learned about the “Agora,” or outdoor marketplace, and considered whether agoras could exist in New York City today. Some noted that yes, they already exist here! After all, we have farmers markets and some outdoor malls, which are similar to the ancient Greek shopping model. Others wondered: Why would we go to a marketplace today if we can just order takeout online? It was a fair point :-). We then moved on to the ancient Greek Olympic games, comparing and contrasting them to the modern version. We asked: Why were the Olympic Games important thousands of years ago, and why are they still so special to us today? What can we learn from the athletes? How do countries come together, even while they’re technically competing? Finally, we discussed the Trojan War, and wrote creative pieces from the perspective of Helen — whose abduction by the Trojan prince Paris supposedly started the whole war, or Odysseus, one of the most well-known Greek heroes. I can’t wait to read everyone’s attempts to enter the minds of these famous ancient Greek characters!

As you can see, the first full week in a while was a busy and productive one, and I look forward to more like these in November.

Students have been working away as Mishnah Sukkot expert architects. They translated and learned many sections from the Mishnah and made a plan to build their unique Sukkot. It has been so fun to watch them make their visions come alive. They are making sure that each choice they make in their building has meaning and that they are sticking closely to the rules they learned from the text. I can’t wait to show you the final product at parent teacher conferences! We are also studying about Hannah Senesh. This year our focus is connected to their Humanities character study on how a character becomes more complex as well as comparing Hannah’s journey to the traditional Hero’s Journey. We will be reflecting on our own character development and comparing and contrasting it to Hannah’s.

Fractions, fractions, fractions! This week and last week, the 6th grade have been perfecting their skills on multiplying and dividing fractions. We will be applying this to real life situations when we change recipes to serve different amounts of people. By the end of this week, we will have finished the lessons in Chapter 2, and we will be having a Chapter 2 test at the end of next week.

Students have been exploring in more depth the parts of cells in science. We created custom cell models of either plants or animals cells. Students enjoyed using the textbook as a resource in order to create their cells. It was amazing to hear students use the cell parts names freely when creating the different elements of the model. We will continue exploring the difference between plant and animal cells as we wrap up our unit. 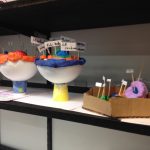 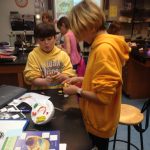 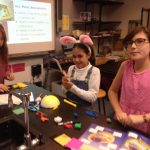 I wish you a good weekend,