Now that the 8th grade is out of the woods and back into the swing of things, a lot of mathematical progression has been made within the past few weeks. We have revisited the concept of functions, as well as the modeling of linear functions, as a refresher before we delve into other types of functions such as exponential, quadratic, and absolute value functions.

Exponential Functions are often used to represent growth or decay for things such as the population or financial investments. Quadratic Functions are often used to analyze trajectories of objects such as a football or a rocket. Absolute Values are used in real life to represent the difference in position between two points. Since distance is not dependent on direction, an absolute value function can be used when distance is imperative but direction is unimportant.

Students in science have been exploring the concept of phase change. We discovered that different materials have an assortment of melting points. In order to explore this concept in a safe manner, we used chocolate. Students needed to take 5 hershey kiss, melt them down, and reform them into a single object. This activity mimicked the concept of melting precious metals and reforming them. In the next few weeks of science we will focus briefly on this concept of transforming matter. 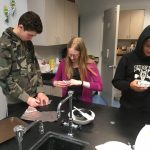 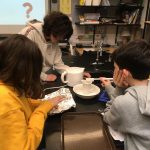 This week in Humanities …

This week in Humanities, we began our unit on the American Revolution by discussing our political system and how it was created from the conditions in pre-war America. Students are looking forward to diving into the Revolutionary War over the next couple of weeks.

In ELA, students are getting close to finishing their independent reading books. They have been making very thoughtful annotations, and I’m very excited to see their final projects come together over the next week. Additionally, we listened to David Foster William’s famous speech “This is Water.” Building on our discussion skills, we learned a new technique for holding valuable conversations, called “Save the Last Word for Me.” The students’ analyses of the speech were very acute and profound. You should be very proud of their analytical dexterity!